A paradigm approach toward predicting barotrauma 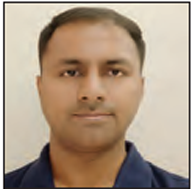 Barotrauma is one of the most common medical problems associated with aviation and has been a causal factor for significant loss of trained aircrew hours. The occurrence of barotrauma has been reported not only in flight but also during simulated exposures to changing pressures as a part of aeromedical evaluation and training. This occurrence is despite the screening of individuals by otoscopy and tympanometry before exposure to barometric changes. In such cases, baro-challenge-induced eustachian tube (ET) dysfunction has been identified as the most probable cause, leading to decreased ability to equalize pressures across the middle ear. This paper describes a paradigm approach to the prediction of baro-challenge-induced ET dysfunction using the nine-step test and ET dysfunction questionnaire. The inclusion of the test as a screening tool before exposure of aircrew to baro-challenge after recovery from their ear, nose, and throat ailments is recommended to prevent occurrence/ reoccurrence of barotrauma.

The occurrence of an episode of barotrauma in an aircrew can compromise flight safety. The current practice dictates that such an aircrew be restricted from flying duties, the period of time being dependent on the severity of the barotrauma. This loss of operational aircrew, whether temporary or permanent, has strong economic implications in the face of escalating training and operating costs.

Routinely, otitic barotrauma is known to occur due to the failure of pressure equilibration of the middle ear in the background of the presence of an upper respiratory tract infection or allergic rhinitis. However, at several instances, it has been observed that otitic barotrauma can occur even in healthy individuals without any identifiable cause. Varying incidences of barotrauma ranging from 2% to 10% have been reported during decompression chamber runs conducted for screening and training of military aircrew and paratroopers.[1-5] A recent retrospective analysis has shown the incidence of barotrauma in asymptomatic paratroopers to be as high as 7.1%.[6] High incidences of barotrauma after flight have also been reported in civil aviation.[7,8] Reporting of such occurrences of barotrauma is not only limited to aviation but also has been largely reported during diving.[9]

Further, reflighting of military aircrew following recovery from ear, nose, and throat (ENT) disabilities involves exposure to changing pressure attitudes in a decompression chamber (ear clearance run) as a test to check the functionality of pressure-equalizing mechanism. The aircrew is exposed to such baro-challenge only after thorough clinical evaluation by otoscopy and tympanometry. However, otitic barotrauma has been found to occur in several aircrew during decompression runs even after symptomatic recovery and screening by otoscopy and tympanometry. This poses a risk of iatrogenic barotrauma in an aircrew who has recovered from an ENT illness and a challenge on predictability of barotrauma by routine clinical tests. These considerations expose a need to develop a simple test that will identify those individuals in whom otitic barotrauma is likely to occur.

Dilatory ET dysfunction is often preceded by an upper respiratory tract infection, or sometimes by an exacerbation of allergic rhinitis, which presumably causes inflammation in the ET orifice or lumen, leading to its dysfunction. Patulous ET dysfunction presents with symptoms of aural fullness and autophony and is thought to be caused by an abnormally patent ET.[10] On the other hand, baro-challenge-induced ET dysfunction is defined as the presence of aural discomfort, popping, or pain, which only arises in case of ambient pressure changes, without abnormalities on otoscopy or tympanometry,[10] which is typical for occurrences explained above. In literature, this type of ET dysfunction has been described as a cause of barotrauma not only during scuba diving or on descent from altitude but also under conditions of less marked ambient pressure fluctuation.

A paradigm approach towards predicting barotrauma

Several tests exist to test for pressure regulation function of ET.[11,12] Simple, non-invasive tests include Valsalva, Politzer, and Toynbee tests and ET catheterization, however, have been described to have poor sensitivity and specificity in diagnosis of ET dysfunction.[11,12] ET function in individuals with intact tympanic membranes may be determined by manometry, tympanometry, or sonotubometry, which also have been shown to have poor predicting probability of an ET dysfunction during baro-challenge. This makes the diagnosis or detection of baro-challenge-induced ET dysfunction challenging with present routine tests.

Tailor et al. reviewed 16 studies involving seven different types of ET function tests.[13] The tests in the included studies were required to measure ET function in patients reporting baro-induced ear symptoms or barotrauma. In their review, they found that the Bluestone’s nine-step test was the most commonly used outcome measure, with overall test sensitivity and specificity ranges of 37–100% and 57–100%, respectively. Tympanometry test sensitivity was consistently poor (0–50%) though specificity was higher (52–97%). Although they recommended that no single test could diagnose baro-induced ET dysfunction which could used in clinical practice, they suggested that a combination of the nine-step test with other objective tests or patient-reported measures as most promising in the diagnosis of baro-induced ET dysfunction.

The nine-step test was used by Hussein and Abousetta[14] to predict ear barotrauma in aviators and found the test provides a reliable prediction of barotrauma with 89% sensitivity and 100% specificity. Uzun et al.[9] studied use of nine-step test in prediction of middle ear barotrauma in scuba divers and found the test to be the most efficient with highest predictive values (positive predictive value 83% and negative predictive value of 95%), whereas the Valsalva and Toynbee tests were unreliable in predicting barotrauma (PPV of the Valsalva and Toynbee tests was 0% and 25%, respectively). In a systematic review of tests for ET function conducted by Smith and Tysome[11] and Doyle et al.,[12] it has been observed that the nine-step test and the 7-item ET dysfunction questionnaire (ETDQ-7) have highest sensitivity and specificity in detection of ET dysfunction. The summary of nine-step test is presented in Table 1 and schematic representation of Bluestone’s nine-step test is presented in Figure 2.

At present, the aircrew and paratroopers are screened for ET dysfunction by otoscopy and tympanometry before exposure to decompression runs. Literature review has shown that Bluestone’s nine-step test and the ETDQ- 7 questionnaire to have high negative predictive value (>95% specificity). Hence, the nine-step test and ETDQ-7 questionnaire are recommended as additional screening tests to screen for baro-challenge-induced ET dysfunction. The tests may be included for the evaluation of aircrew reporting for review after the resolution of otitic barotrauma or after ENT procedures before exposure to baro-challenge in the decompression chamber. With its high negative predictive value, the ETDQ-7 questionnaire, which can be easily administered, may also be used in the field by the authorized medical attendant for assessing presence of any possible baro-challenge-induced eustachian dysfunction in aircrew whenever required.

The ET function is generally regarded as acceptable if hearing, otoscopic findings, and tympanometry are normal and there is no history of ear disease. However, baro-challenge-induced ET dysfunction can occur with normal ENT findings on ground and manifest even under conditions of less marked ambient pressure fluctuation. Bluestone’s nine-step test and ETDQ-7 questionnaire have high negative predictive value and are recommended for assessing and screening for baro-challenge-induced ET dysfunction in aircrew and paratroopers.