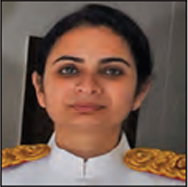 A 41-year-old test pilot from the fighter stream presented to the Institute of Aerospace Medicine (IAM) with carcinoma lower one-third of rectum (opted) and a history of 2 years of follow-up post-surgery. He was physically fit with a healthy stoma in the left iliac fossa region. There was no history of local recurrence or distance metastases of colorectal cancer (CRC). During his evaluation at IAM, the officer had completed the OPTRAM profile with a stomal guard in place and could do AGSM effectively. Considering the overall prognosis, which was found to be favorable, the pilot was recommended an upgradation to a restricted flying category in the type, subject to a 1 time waiver from Director General Medical Services (air).

According to the Indian Council of Medical Research consensus document for the management of CRC 2014, the annual incidence rate of colon cancer and rectal cancer in Indian male population is 4.4 and 4.1/100,000, respectively. Surgery is the primary treatment for such cancers and they are mostly curative. Multimodal therapy with neoadjuvant chemotherapy and radiotherapy is done to improve the survival rates. Latest reports published by the National Comprehensive Cancer Network for Rectal Cancer, Version 2.2018, Clinical Practice Guidelines in Oncology indicate that the peak mortality rates are currently down by 50% due to better treatment modalities. Depending on the site of primary tumor, the surgery might leave the patient with either a temporary or a permanent colostomy wound.

There was no available record/published case report of any pilot being returned to the cockpit in military flying with a permanent stoma. This case was a first of its kind with respect to aeromedical decisionmaking. With mortality rates decreasing due to effective treatment for cancer, aeromedical decision in more such cases may be required in the future. This case will serve as a precedence in effectively returning trained aviators to the cockpit.

According to the Indian Council of Medical Research (ICMR) consensus document for the management of CRC 2014, the annual incidence rate of colon cancer and rectal cancer in Indian male population is 4.4 and 4.1/100,000, respectively.[1] Surgery is the primary treatment for such cancers and they are mostly curative. Multimodal therapy with neoadjuvant chemotherapy and radiotherapy is done to improve the survival rates. The latest reports published by the National Comprehensive Cancer Network for Rectal Cancer, Version 2.2018, Clinical Practice Guidelines in Oncology indicate that the total mortality rate is currently down by 50% due to better treatment modalities.[2] Depending on the site of primary tumor, the surgery might leave the patient with either a temporary or permanent colostomy wound. Increasingly people are getting their lives back after permanent colostomy and are involved in high-risk jobs such as firefighting, policing, surfing, and contact sports such as professional boxing and flying. In December 2018, a test pilot of the Indian air force reported to the Institute of Aerospace Medicine (IAM) for aeromedical evaluation post-multimodal treatment for lower one-third of rectum with a permanent colostomy.

This 41-year-old pilot from the fighter stream in January 2016 reported with bleeding per rectum. The officer had complaints of intermittent episodes of bleeding per rectum which did not respond to symptomatic medication. In March 2016, the officer underwent a colonoscopy which revealed an ulceroproliferative lesion <2 cm inside the anal verge and extending 8 cm in the rectum. Tissue specimen taken for histopathology revealed moderately differentiated adenocarcinoma. Positron emission tomography (PET) scan done in March 2016 confirmed the diagnosis. The pilot underwent neoadjuvant concurrent chemoradiotherapy starting March 22, 2016. It consisted of 28 days of 50.40 gray external beam radiotherapy pelvis exposure with two cycles of chemotherapy (5 fluorouracil with injection leucovorin). This concluded by April 28, 2016. On June 28, 2016, abdominoperineal resection with descending colostomy was carried out. The post-operative period was uneventful and the pilot recovered well. Post-surgery period was followed by adjuvant chemotherapy 6 + 6 cycles of folinic acid, fluorouracil, and oxaliplatin-4 (oxaliplatin + leucovorin + folinic acid + fluorouracil) from August 4, 2016, to February 28, 2017. Thereafter, the pilot was under observation for recurrence and metastasis. During follow-up, a non-fluoro- D-glucose (FDG)-avid nodule in Rt lower lung was seen which was investigated with contrast-enhanced computed tomography in May 2017 and September 2017 and PET scan in October 2017 and August 2018. The lesion remained non- FDG-avid and hence was considered benign. As per the IAP 4303 (4th ed.), the officer had completed 2 years in non-flying category since the initial diagnosis and was still advised regular follow-up; hence, he was opined a permanent non- flying status.

The officer had maintained a rigorous exercise regime post-surgery and appealed against the permanent non-flying status. His case was considered and required administrative approval of return to flying status was given. The officer was then sent to IAM for aeromedical evaluation.

For evaluation of return to flying status, the following were considered:

Permanent colostomy is an artificial opening made in the abdominal wall for the colon to divert feces and flatus outside the abdomen where they can be collected in an external device.[3] Earlier such patients required a lot of medical and psychological support. Due to increase in number of colostomy resulting from rising number of perineal injuries, increasing incidence of CRC and inflammatory bowel disease, there has been a lot of development in the field of management of colostomy. A range of products is available for support and care and stoma and they allow the colostomies to lead a productive and healthy life. Concerns regarding a colostomy are mainly regarding the long-term complications such as stomal prolapse, stomal stenosis, parastomal pyoderma gangrenosum, and parastomal hernia.[4]

Existing guidelines for reflighting a pilot with permanent colostomy are as follows:

Recertification after the treatment of malignant disease is calculated by an internationally accepted formula.[9,10]

Risk of recurrence in the certifying year X risk of type of metastasis most likely to cause incapacitation X weighting factor Table 1.

Annual recurrence rate of CRC was not available directly for Indian population, hence, was calculated from the survival rates. According to the consensus document of ICMR[1,11] at the 2nd–3rd years, the survival rate was 0.9/90%. Hence, the risk of recurrence was 10%.

In case of CRC, the liver is the predominant site of metastasis in most patients (7.7%), there are few studies which also indicate a high risk of pulmonary metastasis (11.4%).[12-15] The brain was the least common site of recurrence with a recurrence rate of 0.5% Table 2.

Since it was well below 1% acceptable risk criteria, it was considered inconsequential. The direct recurrence and metastasis were unlikely to cause any overt incapacitation. Any recurrence/relapse would be detected during routine follow-up; much before it became a flight safety concern.

Sudden incapacitation due to stomal complications

Ability to cope up in the aviation environment

Although not related to aeromedical considerations, social acceptability was also a concern. The officer had trained his bowels for evacuation in 24 h by irrigating the colostomy every morning. This procedure kept the colostomy dry for the next 24 h. The officer was able to wear uniform and overall without any difficulty. If someone was not aware of his colostomy status, the person would never come to know about it just by looking at him in the normal course of the day. He had been working for the past 1½ years and had been socially active. The colostomy had not caused any discomfort to coworkers at his workplace or stress during social gatherings.

After a careful evaluation under all aviation stressors and taking into account the global precedence, the overall prognosis was found to be favorable in this case. He was opined to be fit and upgraded to a restricted flying category with 1 time waiver from Director General Medical Services (air).

During his evaluation at IAM, the officer had completed the OPTRAM profile with a stomal guard in place. He was able to effectively do anti-G straining maneuver, he was able to sustain the pressure of an inflated anti-G suit over his flying overall during all the runs carried out in the high-performance human centrifuge. Post the centrifuge run, there was no increase in ooze from the stomal site nor was the officer symptomatic. IAM recommendation was to upgrade him to a restricted flying category in the fighter stream and request for an executive report in trainer aircraft under operational flying conditions. It was also requested that the pilot during his sortie is to be observed by a qualified and experienced pilot and assess the condition of the stoma under actual aeromedical stressors.

During the detailed aeromedical evaluation done at IAM, extensive search for global precedence was done. There was no available record/published case report of any pilot being returned to the cockpit in military flying with a permanent stoma. Hence, this case is a first of its kind with respect to aeromedical decision-making. All the evaluations done including vibration stress and pressure changes were suitably modified to test this case. With mortality rates decreasing due to effective treatment for cancer, aeromedical decision in more such cases may be required in the future. This case will serve as a precedence in effectively returning trained aviators to the cockpit.

The authors certify that they have obtained all appropriate patient consent forms.