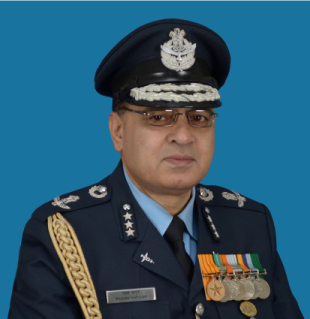 Air Mshl Pawan Kapoor, an alumnus of the Armed Forces Medical College, was commissioned into the Army Medical Corps on 10 Oct 1979. He holds a Masters Degree in Hospital Administration from the prestigious AIIMS, New Delhi. Amongst his other qualifications are DNB (Health & Hosp Adm), DHHM, MMS (Osmania University), MBA (IGNOU) and M Phil (Defence and Strategic Management).

Air Mshl Pawan Kapoor is a Hospital Administrator of national repute. He has published more than 40 papers in various journals and contributed more than 10 chapters in published books. He is a Post Graduate examiner of several universities. He is the founder member of National Accreditation Board of Hospitals & Healthcare Organisation (NABH) and is presently the Chairman of NABH Accreditation Committee.

He is NDC qualified and is the only AFMS officer to have been awarded the prestigious Col Pyarelal Gold Medal. He has also undergone LDMC course in which he was awarded the Interservice COAS Integration Trophy, the first for any AFMS officer. He also won the award for Best Dissertation & Case Study.

He is the architect of several path-breaking projects in the AFMS. For his distinguished services, Air Mshl Pawan Kapoor was awarded the Vishishth Seva Medal in 2009, COAS Commendation in 1981, 2004, 2008 and His Order of Royal Emblem from Sultan of Oman.